Travelling India with young kids – is it worth it?

India is rarely a top travel destination for young families. The ever-jostling crowds, the incessant honking, the haggling, the selfie requests, the red tape, the litter, and the infamous ‘Delhi Belly’. It’s certainly an attack on the senses and travelling India can hard work at the best of times, let alone with little people along for the ride. So travelling India with young kids, is it worth it?

For those families that take on the challenge, the rewards can be great. Check out our post: Twelve Tips for Travelling India with kids. India truly is incredible and you will experience adventures like nowhere else on the planet. Although for some, understandably, it’s just too much and there are so many other places to explore in this world for half the hassle.

So we reached out to some top family travel bloggers who have also travelled India for their honest thoughts, and we asked them the all-revealing question: would you go back?

www.globetotting.com
Age of kids: 18-months when the family moved to India and their daughter was born in India. They lived in India for three years.

“During our three years living in India we travelled a lot, both to explore the country and to escape the craziness of New Delhi where we were based. Many of our trips were incredible such as our stay at the Glenburn Tea Estate in Darjeeling and the RIFF festival in Jodhpur. But there were also moments when we wished we had never left home, such as the time we waited for hours with a toddler and a baby in 35deg heat on the platform at Old Delhi Railway Station for an overnight train that never came. But this is India – a country full of amazing highs and crashing “what on earth are we doing here” lows.”

Would you go back? “Absolutely!”

Globetotting at the Taj Mahal, Agra

Dawn from 5 Lost Together

“We spent a month in India with our three kids and both the highlight and low light occurred while on trains.

The lowlight was my 5 year old coming down with food poisoning on the train. The night before we had been having dinner at a local restaurant. They had brought metal cups full of water, which we usually put aside as we always drank bottled or filtered water in India. Before we could put the cups aside, my five year old took a drink. No big deal, we thought; the restaurant was a pretty nice local place. In the night he woke up sick, but we had to board a train to get to an airport in another city. On the train the vomiting turned to the other type of sickness and the poor kid only had a hole in the train’s floor as a toilet. That trip I learned how well Imodium works, but it was a rough couple of hours.

The highlight occurred in our first week in India and is one of my fondest memories of our time in India. We ended up in a carriage where you needed a reservation, which we didn’t have. A large extended family took us under their wings, squeezed us in between them, gave up their seats for the kids and bought us chai from the chai vendors that roam the trains. We talked about India, we talked about Canada, we talked about their lives and they doted on our children. We kept in touch with them throughout our time in India. It was serendipity that we met them at the airport when we were leaving as they were meeting an uncle there. To be befriended by strangers in a foreign country is one of the most precious parts of travelling.”

Would you go back? “Definitely! We spent our month in India in the south and we are eager to explore the North next”

Two members of 5 Lost Together riding the rails

Ian from The Travelling Page Family

www.thetravellingpagefamily.com
Age of kids: 3 and 5

“Family travel in India with young children has been amazing so far. Our best times have been our kids playing with local kids, and attending a Hindu wedding in an ancient temple. The spectacular sights and delicious food are nice too. Our worst time was definitely the whole family being sick on an overnight train. Our strangest times are what we call the selfie-storms. Imagine dozens of young men and whole families surrounding you and wanting to hold your kids for selfies. Now I know what it feels like to be facing the paparazzi.”

Would you go back? “It’s been a really great experience so far; we’re halfway through our 2 month visa and we’re already planning a second visit next year.”

The Travelling Page Family in Hampi

Sara from The Wheelers on the Bus

www.thewheelersonthebus.com
Age of kids: 5 and 8

“Having been on the road for 9 month, Northern India was our hardest destination so far. Why? Well we decided to go at the height of summer for one, which was particularly stupid. It was HOT and low season, so transport was limited but mainly because TOO MANY SELFIES. Our dream trip to the Taj Mahal ended abruptly with hysterical children. People were lovely one-to-one, but the intensity of all of the attention was just too much and followed us everywhere.”

Would you go back? “We wanted to love it, but would you flog a dead horse? No, we won’t be going back.”

The Wheelers on the Bus in Delhi

Susannah at Our Tribe Travels

“A day doesn’t go by where I don’t have to ask my 6 year son to stop shouting. In his excitement to tell me about what happened in the latest Ninjago episode, or what he did at school with his friends, his volume is always set to loud.

So when we arrived in India, hot humid and sticky, my son was in his element. India is often described as an ‘assault on the senses’. Before living there I used to picture the colourful saris and temples and imagine the strong scent of spices and fresh fruit, but I’d never considered the sounds associated with this vibrant country.

Cue LOUD. EVERYTHING is LOUD. The music is always turned up to the max, the horns beep incessantly, warning of their presence even though the traffic has ground to a halt, and the live drumming and street parties should come with a health warning.

“Mummy, Mummy, MUUUMMMMMMY”
“Sorry Alf, but you’re going to have to speak up. I can’t hear you.”

Would you go back?: “Yes. I would love to go back to India. It’s really got under my skin.”

Click here for Susannah’s video for how loud India really can be!

Selfie time for this little man from Our Tribe Travels

Where would we be without our trusted Lonely Planet?

You may also like to read:
Happy in Hampi with kids
Kochi with kids: top 5 things to do
Twelve Tips for Travelling India with kids

Very interesting to read the pros and cons to traveling in India with young kids. It’s great to see so many families who did take the leap. Although from reading I gather India definitely isn’t for the faint of heart 😉 We didn’t dare with our then 2-year old when we were in the area (Sri Lanka), but he’s a bit older now and India is still very firmly on our bucket list.

Thanks for reading Lisa 🙂 It’s definitely not for the faint hearted and if the elements are against you it can be rather draining. It definitely shouldn’t be a destination for the first ever family holiday. But India has a way of getting under your skin and we love it. I’m sure Sri Lanka is a great stepping stone. We’re actually heading there in a few weeks!

Thanks for reading. India is indeed a wonderful adventure ?

I really enjoyed reading this. Actually I’m loving your blog in general. I’ll be honest and say I don’t think I’ll be taking my two to India while they’re young. For no other reason than there are other places I want to go first. But it was really interesting to read the honest accounts of people who have travelled there with their children. Thanks for linking up to #FamilyTravelTips.
Nat.x

I’m so pleased you’re enjoying my blog ?. And I completely understand where you’re coming from! There are so many amazing places to travel with little ones on this planet. India can wait ?

Very excited about having found this post. We are heading on our round the world adventure next year with our 2 boys. After south east Asia we are heading to Nepal & India, and to be honest, although it is my dream to go there, it is the destination on our year of travel that concerns me the most. Having read this post it has calmed my nerves somewhat and I am sure that we will enjoy whatever India chooses to throw at us. Thank you!

I’m so excited for you! What amazing adventures await. Pleased you found us and this settled your mind. We’ve got a post with tips on travelling India with young kids too. It can indeed be challenging, but if you get it right, it’s very rewarding ?. Do let us know if you make it to Bangalore!

I will do! Just off to read your post on travelling India with young kids now – I have my cup of Indian tea at the ready !! 🙂

What a wonderful insight! I particularly loved the story of the strangers on the train. Precious moments.

Travelling India certainly has its highs and lows. It’s these precious moments that totally make it worthwhile 🙂

It is enjoyable to travel in India with your kids. When you bring your kids to India for the first time, there is a lot of surprise for them, India’s life is different from your children’s lifestyle. For them, this India trip can be memorable, and you like it. Thanks for such post and please keep it up.

Thanks for reading. Travelling India is certainly an adventure, but not without it’s challenges. We have mostly found it extremely rewarding. 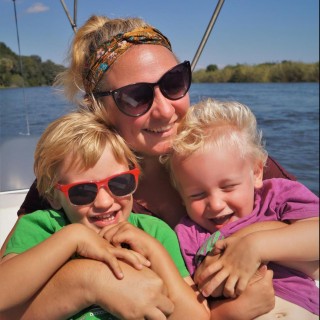 Were you an intrepid backpacker in your previous life? Exploring distant and exotic lands on a budget, getting off the beaten track and feeling like you were doing something different? Now that young kids are in the picture, travel priorities may have changed. But you don’t have to get sucked into the package holiday bubble. Adventure travel with young kids is possible! Jenny x

latest on instagram
After our France travels, quarantine, then back to

I did one of those 'ask us anything' questions on

FINALLY! 🥳⁣⁣ ⁣⁣ Quarantine is over and

Four days left of quarantine ✨ Our bongo is sa

One week of quarantine down, and one to go 💪⁣

You may have noticed that we didn't end up doing w

Felt a twinge of the ol' #mumguilt this morning, s

And the two weeks of quarantine has begun... wish

The boys were back out on the surf today 🤙🏄